For my readers under the age of 40, Cadillac Ranch was an art installation built in 1974 by the Ant Farm, a San Francisco collective of artists and architects. It is still visible along the old Route 66 near Amarillo, TX. 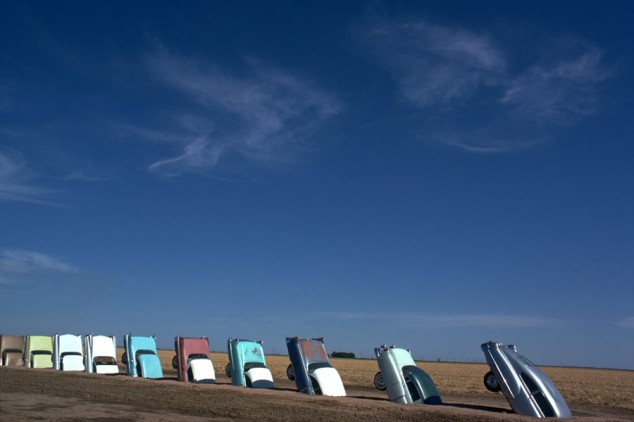 In an episode of Charles Kuralt’s On the Road, Marsh had this to say about the work:

Charles Kuralt: “When people ask you, what are all those ten Cadillacs doing out there in your wheat field? What do you answer?”

Stanley Marsh 3: “Depends on who they are…when I get a chance I lie to them. I tell them it’s for an Elvis Presley movie or Evel Knievel to jump over or maybe it’s the Caddy Cult, and it’s the new Mother Church for Home Religion. I tell them whatever strikes my fancy.”

SM: “Well I’d have to tell you the truth. The truth is it’s a roadside spectacular sculpture made by a group called the Ant Farm, architects from San Francisco.

Early photos of the project can be found at Wyatt McSpadden Photography.

via The Selvedge Yard.

Memories… // via The Selvedge Yard.